What would be the musings and thoughts of Adolf Hitler if he woke up in present day Berlin, thinking he had just awaken from another night in the furherbunker in 1945? 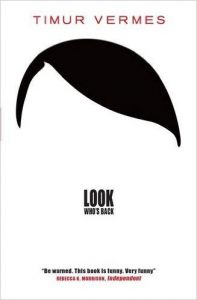 Timur Vermes gives this premise a shot in his novel “Look who’s back“, and a very intriguing one it is I must add. Though he still has his obviously ill and distorted world views, he also very astutely addresses the present day incompetencies, bureaucratic annoyances and inefficiencies that come with modern democratic politics in a way only an outsider with dictatorial urges can do. This leads to hilarious observations, such as this little gem here:

Him on a politician’s obligations to engage in sports of any kind:

“[…] And as for appearing in swimming trunks – well, that is the most preposterous thing imaginable. You couldn’t dissuade Mussolini from doing it. And more recently that suspect Russian leader has been doing it too. An interesting fellow, no question, but as far as I am concerned it is a foregone conclusion: the moment a politician removes his shirt, his policies are dead in the water. All he will say is, “Look, my dear fellow countrymen, I have made the most extraordinary discovery: my policies look better without a shirt on.” What sort of nonsensical proposition is that?”

and so he continues his musings:

“I have even read that a German war minister was lately photographed with a wench in a swimming pool. While his troops were in the field, or at least preparing for deployment. Had I been in charge, this would have been the gentleman’s last day in office. I wouldn’t have bothered with a letter of resignation – you lay a pistol on his desk, a bullet in the chamber, you leave the room, and if the blackguard has an ounce of decency he knows what he has to do. And if not, the following morning the bullet’s in his brain, and he’s face down in the pool. Then everyone else in the ministry knows what to expect if you stab your troops in the back while wearing swimming trunks. No, bathing larks were out of the question as far as I was concerned.”

All in all a witty and entertaining novel, I am not surprised the book made it onto the movie screens.