Upon finishing Tony Hseih’s book that had ‘feel good’ written all over it (perhaps even a bit too much sometimes), I started reading Luyendijk’s immersion into the world of London City bankers; ’Swimming with Sharks’. Boy, the contrast with Tony’s book could not have been starker. But like with Luyendijk’s former books on journalism in the Middle East, this book was an absolute page turner. And like he did for the making of his former books, Luyendijk submerses himself into the world of his subjects and manages to paint a picture that is human, balanced, and – perhaps what gives the account a lasting impression – very non-judgemental. 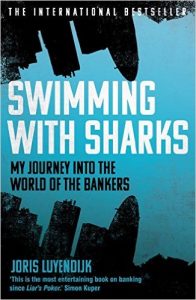 He describes his initial struggle to find bankers willing to share their version of City life, shows that ‘the banker’ does not exist and that – unsurprisingly – how the world of finance entails a vast collection and wide variety of jobs. The people occupying these professions come in as wide a variety of character traits as any other profession, and though the classic stereotype ‘Master of the Universe’ loudmouth alpha does indeed exist, Luyendijk also identifies ’teeth grinders’, ‘blinkers’, and a bunch of other types of character traits that constitute this world. In short, Luyendijk shows that the people in this profession are as human as any one of us.

This leads the reader to a conclusion that is much darker and more worrisome than the picture of ‘a handful of rotten apples that ruin it for all’ would have painted though. Luyendijk points out how the whole incentive structure in banking is set up to favour short-term gains over sustainable growth and prosperity, how incentives push one to ‘eat or be eaten’, and urge every entity – the banks, the employees, the politicians, etc. – to care for nothing else but the self. In many ways the world of (investment) banking is a world of ‘grab all you can grab, because tomorrow the party might be over’.

Though the book is a fantastic read (if you like Micheal Lewis’ Flash Boys or The Big Short, this is right up your alley, and vice versa) it does leave one with the uneasy feeling that nothing has fundamentally changed since the near collapse of our financial system in 2008. Correction: the near collapse of ‘the world as we know it’, according to the insiders themselves(!) For it was the bankers themselves who truly knew how bad things were in 2008, and it were the bankers who were calling their families, urging them to pack food and water and be prepared to drive off to the countryside at a moment’s notice.

The problem is that, with the dawn of market triumphalism in the 70’s of the previous century, came a whole new system that is hard to stop now most of the big banks have become ‘too big to fail’, with market values that eclipse the GDPs of many a country. In the era that partners still had a stake in their investment bank, and that these banks were not allowed to be a part of other, more conservative areas of banking such as retail banking, there was an actual incentive to manage risks, risk management was held in high esteem. However, the publicly listed investment molochs of these days, where everyone’s yearly bonus is measured on how much money one has made the bank and nothing else (read: sales of investment products, where one is generally not held accountable for the long-term failure of the investment products), there is an incentive towards risk taking behavior. And risk managers became the whining losers of the company, as they are not the ones making money.

Combine this with the volatility of everyone’s job, from junior to CEO, and the accountability for this all, all but disappears. Luyendijk compares it (loosely paraphrasing) to opening the downward spiralling plane’s cockpit door, only to find that the captain’s seat is empty. Add to this the immense complexity of the financial products thought up by the best and brightest of ‘quants’ with Ph.D.s in physics, mathematics, engineering, and related fields. Smart people drawn to this exciting and immensely complex world in a post space age, post cold war era (read: an era where excitement, purpose, and funding in other professions has waned). Yet however smart, no person has a complete overview of the system any longer: the sheer size, complexity and the speed at which the financial system operates has long outpaced the capacity of human thinking.

So what about politics, what about an external force to reign in this beast before it spins out of control again? Well, perhaps in an ideal world yes, governments and global institutions would force banks to split into entities with well-defined activities again, split them up into entities no longer too big too fail. Perhaps then some sense of control could be regained. But I am not enough of an economist to know for sure if this would solve all problems in our ever-more interconnected world. And in our real world, where politicians get rewarded high-status, high-reward board and advisory positions in today’s banks and multinationals after their political career has ended, the incentive to change the status quo and agitate the system all but lacks.

In short, quite the grim situation if you ask me. The question is not if there will be a next financial crash, but when. The only path towards a solution, as I see it now, is development of a (benevolent) AI system that can create the overview we have now hopelessly lost. Though the sheer complexity that this solution entails might make this a proposition that is currently as useless as it is easy to propose, I am well aware. Anyway, definitely worth reading, as you might have guessed by now.

There are two opposing trends in business in the 21st century, it seems: a ruthless, cold world of market reasoning that crowds out all social norms as is exemplified by this book, and the warm, social, engaged world where profitability can be combined with altruism and purpose, as Tony’s book shows. Who will prevail? Will there be a showdown? Anyway, read more of Luyendijk on this topic on his Guardian banking blog.